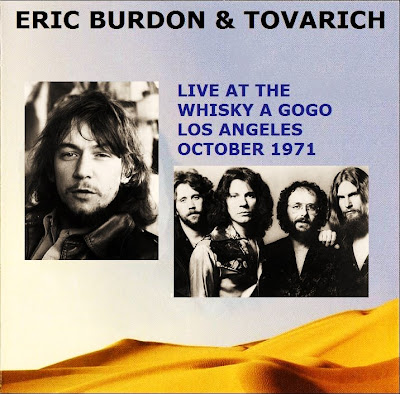 "Eric Burdon remains a curiously compelling live performer. His blues growl has not been tamed, nor has his musical integrity or his acute sense of showmanship. He remains ... one of rock's most worthy sons"
Enjoy !!!
Eric Burdon, the former Animals frontman in 1971, created a very short-lived band called Tovarich, and played with the band in October 11, 1971 at the famous Whisky A Go Go in Los Angeles.
: Great gig with fantastic musicians (George Suranovich & John Sterling particularly) concert was a shame that this lineup of the band only existed for a few months, but luck is that it remained a relatively good quality recording for posterity.

George then played briefly with the Blues Image before joining the Eric Burdon Band. While working on the album "Guilty", George met John Sterling (guitar) and Kim Kesterson (bass). Along with Kevin Kelly (keyboards), they formed Tovarich (Russian for "Comrades"). Besides backing Burdon and blues/jazz vocalist Jimmy Witherspoon, they became a popular attraction on the L.A. club circuit and recorded an album of their own (unreleased). They later recorded a second album with Burdon, "Stop!", as well as "Black & White Blues" by Burdon and Witherspoon. That album, released only in Europe, included George's composition "Wicked Wicked Man"(which was recently resurrected by Burdon as the title track of one of his own albums). Tovarich also provided the soundtrack to the movie "Revenge of the Cheerleaders".(By Adamus67)