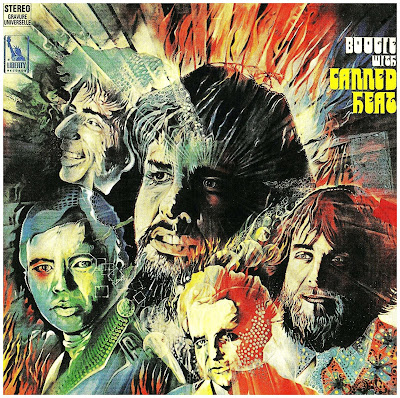 Canned Heat's second long-player, Boogie With Canned Heat (1968), pretty well sums up the bona fide blend of amplified late-'60s electric rhythm and blues, with an expressed emphasis on loose and limber boogie-woogie. The quintet -- consisting of Alan "Blind Owl" Wilson (guitar/vocals), Larry "The Mole" Taylor (bass), Henry "Sunflower" Vestine (guitar), Aldolfo "Fido" Dela Parra (drums), and Bob "The Bear" Hite (vocals) -- follow up their debut effort with another batch of authentic interpretations, augmented by their own exceptional instrumentation. One development is their incorporation of strong original compositions. "On the Road Again" -- which became the combo's first, and arguably, most significant hit -- as well as the Albert King inspired anti-speed anthem, "Amphetamine Annie," were not only programmed on the then-burgeoning underground FM radio waves, but also on the more adventuresome AM Top 40 stations. Their love of authentic R&B informs "World in a Jug," the dark "Turpentine Blues," and Hite's update of Tommy McClennan's "Whiskey Headed Woman." The Creole anthem "Marie Laveau" is nothing like the more familiar cut by Bobby Bare, although similarities in content are most likely derived from a common source. The side, as rendered here, is arguably most notable for the driving interaction between guitarists Wilson and Vestine as they wail and moan over Hite's imposing leads. Saving the best for last, the Heat are at the height of their prowess during the lengthy audio biography on "Fried Hockey Boogie." Each member is introduced by Hite and given a chance to solo before they kick out the jams, culminating in Hite's crescendo of " ... Don't forget to boogie!" In 1999 the French label, Magic Records, issued an expanded edition of Boogie With Canned Heat supplemented by half-a-dozen sides, such as the 45 RPM edits of "On the Road Again," "Boogie Music" and "Goin' Up the Country." Also included are the once difficult-to-locate 45-only "One Kind Favor," as well as the seasonal offering "Christmas Blues" and "The Chipmunk Song" -- with guest shots from none other than Alvin, Simon, Theodore, and David Seville of the one and only Chipmunks. For enthusiasts as well as listeners curious about the oft-overlooked combo, this is an essential, if not compulsory platter. ~ Lindsay Planer,(All Music Guide)