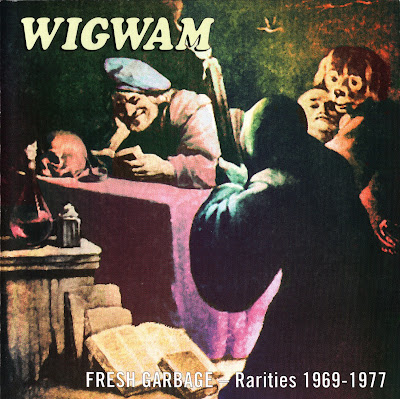 This is an album with 7 single tracks and lot of fantastic live through years,
it starts with the first single from March 1969 and ends up with on jam from the last tour
recorded in Stockholm in December 1977, so here you got a double with lot of marvelous music,
and on this album you got all the line-ups in a chronical order, so all you have to do is to
enjoy these tracks, because is lot of goodies in this album, it has a nearly 14 minutes live
version of the mavelous track Fairyport and 18 minutes of No New Games/Grass For Blades,
because a great song always gonna be better if it's expanded a little, and you got the second
and third single with Finnish vocal, and is a treasure to listen to these rare singles,
but by now I bet that you know what Wigwan is all about. 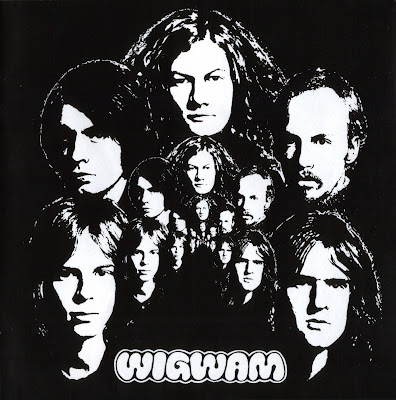 Wigwam sometimes gigs version man Spirit's song, named after the rare double is finally a reality. Already Highlights compilation (1996), a drawing-board thrown on an idea put together main part consists of a number of unknown single tracks, as well as explosive live recordings. There is not only the band's own material, including cover songs such as The Band, and Montgomery's repertoire.

Given that it is a compilation of rarities and live performances, this double-CD retrospective is not the best starting place for those interested in the back catalog of Wigwam. It is, however, an excellent addition to those already initiated. Wigwam was one of the key players of the Finnish progressive rock scene in the late '60s and early '70s, and an instrumental group in establishing English-language rock music as a viable alternative for Finnish bands. Its ability to work clever pop melodies into their complex and innovative albums should have resulted in a much larger scale success than they achieved, but their attempts at breaking into the British market through a contract with Virgin failed, and as a result they're not well known outside Finnish borders.

The folders exciting period 1969-1973 is a comprehensive first CD with the absolute of the highlights include rolling over the Losing Hold both agile Pinch. While Jukka Gustavson and Jim Pembroke superb vocalists through the whole package, recorded in February 1971, 'Losing Hold' is the first real tour-de-force keyboards. In November 1973 recorded Pinch in turn, provides for a great photo-renowned musician family 21-year-old sprout, which has already been able to make their debut album (Eye Gum Bark replaced) under his own name, but continues Wigwam ranks. Pekka Pohjola's style has just been perfected over the years, but already Pinch includes a Finnish sense, which he refuses to work on finding, but so that others admire.reenhpy237

What's Finnish-language material will, Gustavson mythical hypochondriac, Wigwam second single on a side and a list of the band's first hit, has been joined by both conscious / pedagogues preach that Mats Hulden mini epic called eviction. The furious rock track muddled manausriittiin work as high priest paasaa Otto Donner, and its controlled unparalleled even in the most prestigious colleagues production. Close To The Edge is at this stage of the two, Larks Tongues In Aspic three and a Lamb Lies Down On Broadway four years away.

Fresh Garbage second disc covers the period 1974-1977, and with it the Nikamon anarchic guitar solos make room for Rocky Rechardt the government of expression. Material changes to the overall look while a sleek also for the reason that the lion's share of the songs are either partly or fully Pembroke sharp pen.
Shell is enough: for example, 'Tramdriver' is a song by the conclusion at the same time Katy Lied couple had been up to Donald Fagen boasted. Likewise, the 1975 concert recordings of songs 'Never Turn You In' and 'No New Games' paint a picture of the frightening potential just discovered the band. In fact, this gives a taste of the power latent in the number one plate Lennon cover: it is capable of, but the kind of authority that respects the time to Wigwam in 1973 to take his own imaginary, not the imagination to soar the familiar "what if''Gustavson, Pembroke, Nikamo, Huldén, Pohjola, Rechardt and the Nordic Nuclear Night Club (1975) will be presented at replacing Måns Groundstroem this exclusive collection of their guests (Donner, Pedro Hietanen, Esa Kotilainen, Heikki Silvennoinen) just the right light.
Run again your typical jazz rock from jam and unifying narrative song tradition concoction definition of thirst can satisfy even Progresia name, but preferably Wigwam would apply only to the age-old division of good and bad music. Particularly gets an honorable mention in the end the only one of this reality already left the Wigwam member. He is, of course, the band's engine, drummer Ronnie Österberg (1968-80). Male tight, but flying style extends the examination of every single Fresh Garbage track on the album and the 1976 Dark path for the first time finished their wigwam can not even think without him. For fans it's an essential compilation -- everybody else should start by acquiring copies of Tombstone Valentine, Being, and Nuclear Nightclub to gauge the talent and variety Wigwam was capable of.

Awesome!It does allow the band to stretch aut and show their musical talents.THanks...

Made my New Years! Thank you.