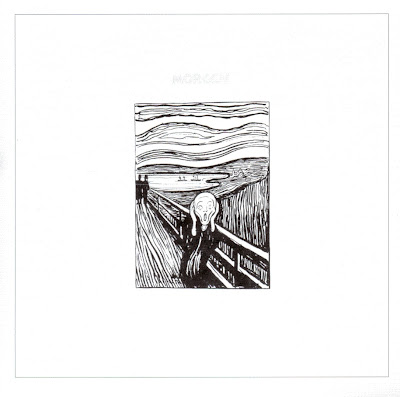 I love this album! Cool heavy guitar work on all tracks. The lyrics are laughable at times, the guy obviously wants to get laid, but goes about it with such pretentious pseudo-poetry.

I love you because I need
I want you to fill full my cavity
Please don't ever leave me
Till I grow tired of your...

It just makes me laugh.

Morgen - American group from Long Island New York City founded by guitarist and vocalist wild man Steve Morgen, but also included drummer Bob Maiman and guitarists Barry Stock and Rennie Genossa. Only one album originally released in 1969,by record label Probe (ABC) released the group’s sole offering playing music from the borderline heavy psychedelic rock filled with mostly sharp, sometimes even angry guitars, vocals and garage of up to is notably, heavy rhythms of drums and bass. Equally captivating as the music is also a black-and-white cover-plate, referring to the famous work painting monochromatic reproduction symbolist Norwegian painter Edvard Munch ' Scream'' The album’s, best known track is the classic “Welcome To The Void.” 40 years later this cut’s over the top acid guitar work and pounding drums still shred the best of speakers. Over the years 'Morgen' has been reissued by grey area CD bootleg Eva and Radioactive. Original label Probe (ABC) may set you back a few hundred dollars.

Steve Morgen’s sexually charged lyrics and over not the top vocals will irritate some listeners but that’s really a minor complaint as most of Morgen is full of great fuzz guitar solos and solid songs Morgen straight up brooding hard rock psych. "She's The Nitetime" is solid acid rock number - proof there's even some garage rock influence in their sound. The album ends '‘Love'’, a glorious magical journey into the 60′s epic psych tune that goes over 10 minutes - it's like White Rabbit minus Grace Slick and plus extended acid-soaked jam. Steve Morgen was a true psychedelic hero and this artifact proves it. It’s a trippy trip into the ’60s as you can imagine yourself wearing a tie, jumping on a camper and swaying heads to the blues as the joint is passed around. This is an album which will rock any hippy party...Mini gem of a record that will reward patient listeners who like a little lyrical intrigue and unpredictable twists with their furious guitars.

My old blog: http://dirtyfunky.blogspot.se/ is deleted by staff. I will make a new one but right now i will have some rest. I'm a little tired of blogging right now.

A nev blog will be started in 2 weeks or 2 month, i really don't know right now, but i can promise you it will be a new one. //ChrisGoesRock

I will add the the blog and adress in here so bookmark this site: http://www.efreeguestbooks.com/mg/multi.pl?116288

There is an official release of this album from Sunbeam (UK) with involvement from Steve Morgen. It has bonus tracks, artwork and documentation. Morgen will actually get some money from it too.

Thanks, cheers from Chile