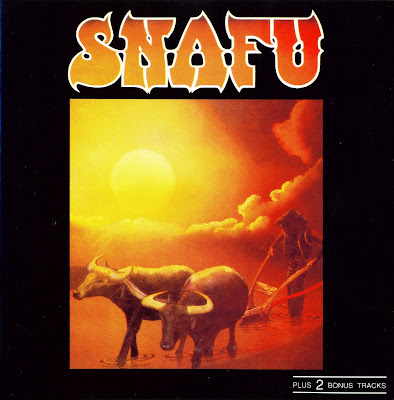 When Paladin folded in 1973 I noted that their keyboard player/violinist Pete Solley had joined Snafu. This was a progressive rock band formed by Bobby Harrison (ex Procol Harum) and Mick Moody (guitarist ex Juicy Lucy - check the latter out too!) which produced 3 albums. A year or two later I picked up a vinyl copy of Snafu's second album "Situation Normal". This was influenced by Pete Solley and was an OK country-rock based album. Having read that this first album had been re-released on CD and was reputed to be better and more rock than country I bought it.
It's all round a better album to me, more rock with excellent slide guitar, some mandolin on one track and violin included on a couple of others. The album opens with a rocking "Long Gone", some great vocals by Harrison on the track and nice guitar from Moody. "Said he the Judge" reminds me of a slow rock song in the Lynyrd Skynyrd mold. "Monday morning" features the mandolin and violin and has a country hoe-down theme. The next track, "Drowning in the sea of love" has a soulful/rock feel with backing wah-wah guitar work. "Country nest" is another laidback country-style song which has what sounds like a steel-pedal guitar rather than slide. "Funky friend" is what it says, a funky rocking track with some violin work again. "Goodbye USA" is another slow rock song with synthesiser work by Solley. The final track "That's the song" is back to rock with plenty of guitar and Hammond organ.
The CD comes in a cardboard gatefold sleeve which replicates the original vinyl copy. The front cover includes a Roger Dean design and when opened there's a photo of the group and their names/roles on the left side, track listing and other production credits on the right hand side. Enclosed in one sleeve is a pull-out sheet of excellent extensive notes on Snafu and the individual musicians put together by Chris Welch with input from Micky Moody. The latter also gives fairly detailed notes on each track.
I liked this CD at the first hearing and the package, whilst only cardboard is far superior because of its original-design finish and the included notes than many bland, noteless plastic-cased CD's. I understand that their last album, "All funked up" is another good funky rock album with no country influence as Solley had left by this time. Must seek that out next.
A short-lived act, like Paladin, but one that I never had the opportunity to see live unfortunately. And the name Snafu? From the American TV series, Sergeant Bilko, it was short for "situation normal, all fouled up" but not applicable to the group or this album! (By J. Bodicoat "Digger") 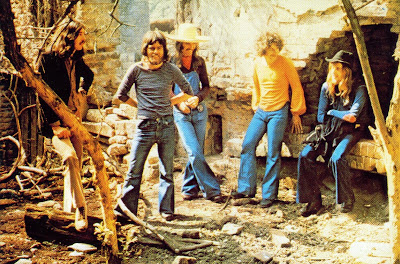 SNAFU predated Sgt. Bilko. And it was Situation Normal All Fucked Up.

Snafu was a British rhythm and blues/rock band, formed in 1973 by former Procol Harum and Freedom vocalist Bobby Harrison along with Micky Moody, formerly of Tramline, the Mike Cotton Sound and Juicy Lucy (later with Whitesnake). With Colin Gibson from Ginger Baker’s Air Force, Terry Popple from Mickey Jupp’s Legend,and the Australian group McPhee and session musician Pete Solley the line-up was completed. Gibson suggested the name Snafu, a term he lifted from a Captain Beefheart LP. The musical influences were mainly American and came from bands such as Allman Brothers and in particular Little Feat, one of Bobby Harrison’s favourite bands. One of Snafu’s earliest fans was Richard Branson who had just built The Manor Studio and he invited them to use it to record their first album at the same time as Mike Oldfield was there recording his opus “Tubular Bells”.

The first album is filled with well-played funky rock with the kind of edge you’d expect from guys who had their backgrounds. The opener “Long Gone” was the single, and a pretty good introduction to the style of the album: a quiet keyboard intro with guitar drifting in, funky mid-tempo drums, Harrison’s suitably raw but melodic and familiar-sounding rock’n’roll voice and a melody that’s easy to listen to,track had already been recorded for Harrison’s “Funkist” album but this version is far superior.

Other highlights include “Monday Morning”, peppered with Pete Solley’s fierce fiddle-playing and Moody also contributes some great mandolin picking and the whole song has an English country fair feel to it. It should be pretty naff but it goes down a treat and is a great jig-a-long bit of fun, the country-rock number “Country Nest”, graced with a melody that hooks on you instantly the aptly titled “Funky Friend” with its kicking drum beat that’s left as loud as possible in the mix (and Solley plays fiddle on this one too), and the climactic closer “That’s the Song” with a dynamite chorus. A balanced album by talented musicians, it forebode good things for Snafu. The album highlight is the track that closed side one of the original vinyl issue, and the only non original track on the album ‘Drowning In The Sea Of Love’. Written by Philadelphia soul legends Kenneth Gamble and Leon Huff it had been a minor hit for American soul singer Joe Simon the previous year. It is a perfect vehicle for Snafu, suiting Harrison’s vocal style perfectly and allowing Moody the opportunity to display his various styles. The use of female backing vocalists also gives the song an extra dimension and it has long beeen one of my favourite recorded works by any artist.

The album highlight for me is the track that closed side one of the original vinyl issue, and the only non original track on the album ‘Drowning In The Sea Of Love’. Written by Philadelphia soul legends Kenneth Gamble and Leon Huff it had been a minor hit for American soul singer Joe Simon the previous year. It is a perfect vehicle for Snafu, suiting Harrison’s vocal style perfectly and allowing Moody the opportunity to display his various styles. The use of female backing vocalists also gives the song an extra dimension and it has long beeen one of my favourite recorded works by any artist.

The second half of the album gets under way with ‘Country Nest’ a slower more melancholy affair with another ballad vocal from Harrison. The opening line of “I’m sitting in my rocking chair I’m smoking a joint in my underwear …….” is nothing short of brilliant and the humour in the lyric all the way through is a positive joy. Co-written with Solley it obviously has some good keyboard runs and the farmyard noises at the tracks end leave a smile in their wake.

The fiddle is back for ‘Funky Friend’ a strutting funky tale of a lost friend. The widdly diddly fiddle this time is more reminiscent of an Irish hoe down than an English fair but just as with the earlier track it is impossible not to jig along to the funky infectious rhythm. Once again musical rocket science it isn’t but it is out and out good time music that leaves nothing but a smile.

Things get a litle more serious for ‘Goodbye USA’ a brooding mid paced funk with some great guitar and keyboard techniques underneath a laid back easy vocal from Harrison, who surely has claims to be up there with the best funky blues vocalists of the day.

The longest track on the album is closer ‘That’s The Song’, a fast paced strutter with a real great vibe. It has an almost evangelical feel to it and it is not difficult to imagine a huge congregation all singing and dancing along in unison. Moody throws in a spectacularly funky solo and the backing vocalists choir is a perfect touch. It is a great funky fast paced end to an album that really should be heralded as one of the classic rock albums of the seventies. The decision to fade down the volume as the track ends though was surely a mistake. The album itself ends with a brief reprise of the riff and melody of the opening track ‘Long Gone’

On its release “Snafu” was greeted with considerable favour from the reviewers of the day and the band quickly gained a huge live following. They also became something of a musicians band and were often praised by comtemporary musicians of the day. Sadly this did not turn into record sales though and neither the album or the non album single ‘Dixie Queen’ (included as a bonus track on CD remasters) troubled the charts. Such was their popularity live though that they secured European tours with both The Doobie Brothers and The Eagles. “Snafu” is a right little belter of an album which is very much ‘of its day’ and it has long been one of my most played albums since finding it in a junk shop for the princely sum of £1 way back in 1980. These days I mostly play the CD remaster but the cherished vinyl edition with its gatefold Roger Dean cover occasionally comes out for a spin.