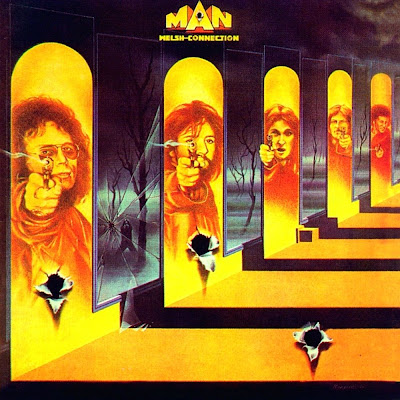 This was to be Man's last studio album for two decades, and with its weak sales (it failed to chart) and underpowered material it's easy to see why the band called it quits for the time being. There's some irony, then, in the closing track being "Born with a Future." It's a good final bow, though, as it's well harmonized and ultimately one of the best cuts on the album. Perhaps this releases's most nagging overall problem is the mix-Phil Ryan's keyboards are high up, while Deke Leonard's bracing guitar parts are less evident than usual. Although this isn't always a liability-the lengthy title track lazily wends its way through some pleasant moog solos and electric piano flourishes-the grittiness of the band's sound is largely squandered here. 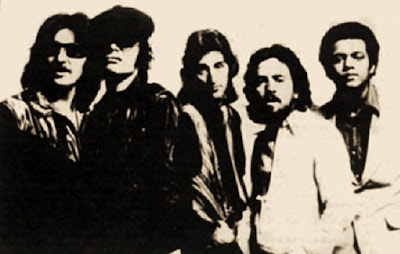 Waht a great band they were.

This album marked the end of the (studio) Man band in their seventies incarnation; following the live Maximum Darkness, Martin Ace and John Cippolina departed, both only being short term occupancies anyway, and in came new boy on bass, John McKenzie, and the return on keyboards of Phil Ryan. John had previously been with Global Village Trucking Company (a band, not a removal firm), and brought a style which had elements of Ken Whaley's fluid, melodic playing, but with a distinctly funky edge to it, something quite definitely new to the Man sound. Phil's keyboards added whole swathes of rich textures, and plenty of opportunities for his up to date synthesiser to take the lead. It's also worth noting that the band had left UA after a long association, and that this was their first release for MCA.

'The Ride And The View' opens the album with a mixture of Pink Floyd and Manfred Mann's Earth Band and of course plenty of long instrumental bits remains in the set to this day, but in a stylistically different guise. The original here is more of a mean and moody piece, the opening guitar is subdued compared to the tour de force it became live during the nineties, and here there is a subtle and sinister overtone created by the electric piano. Deke's vocals are also restrained, helping to cerate an aura of foreboding and mystery. I would expect that if you've heard this live, but never come across the original, it could be quite a surprise. It certainly works.

'Out of Your Head' is another Deke song, again fairly languorous and easily paced, with synth effects high up in the mix. As you might guess from the song title, the influence of certain substances may have played a part in the song's creation.

I recall a poll in the fanzine had 'Love Can Find a Way' as the least favourite Man song, and you cans see why. It's John McKenzie's main contribution to the album, an easy paced song, which to these ears, is a bland, unforgettable piece of plastic soul.

I think the other four tracks can pretty much be considered together as having a consistent feel to them; though there is a degree of variation in tempo and delivery, they seem to be moving generally in the direction of might have been described as 'progressive' - Phil's keyboards providing a wash of background chords for the relaxed and often melodic guitar runs of Micky and Deke. The earthy, slightly r'n'b edge of parts of Maximum Darkness has disappeared altogether, though the music does not have that impersonal feel that marked some of the poorer music of its contemporaries. One thing I did notice having given the album a good listen for the first time in years is how reminiscent Micky's vocal section on Born with a Future is to Drivin' Around on Call Down The Moon; it's as if he had a parallel career as a soul singer. Also an album highpoint is the crescendo at the end of Car Toon, which features some excellent blistering guitar.

I haven't mentioned Terry Williams so far. The reason is simple - the drumming on this album is as immaculate as it ever was. No surprise the guy had no shortage of work once the band split up.

One thing I have to mention, though I don't like to, is

The sound quality of the reissued CD. It's not good. I'm assuming it's been directly remastered from vinyl, as during some of the quieter parts (such as the intro to the very first track) there is a very distinct crackling. I know there is a great nostalgia for old 12 inch vinyl, but this is surely taking things too far.

Twenty odd years on, it's still very much a mixed bag, but certainly a worthwhile purchase for the good parts.