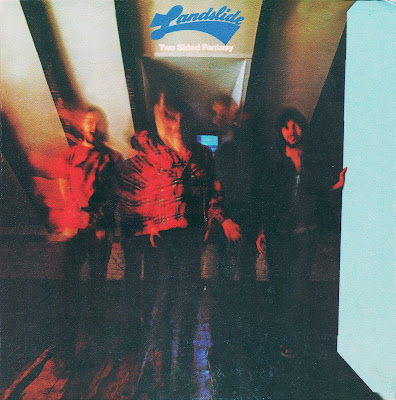 When Landslide cut their album Two Sided Fantasy on Capitol Records, the band and the label probably had no clue that everything would end so fast. The album became a rare collector’s item because of their lack of success. I am sure the album disappeared from LP racks in stores very quickly giving it the “hard to find” tag that turned it into a valued and sought after piece.
This was a good rock band that had a sound comparable to Cream and at times early Santana. They did not do anything special or out of the ordinary, at least not anything that was unique at the time that would separate them from all the other bands doing the same thing. Possibly, with more time to develop as a group and a campaign to spread the word about their music, it may have changed the outcome of their fate.
We have evidence of their efforts and one that has survived many years on this reissue. The fact that this LP resurfaced is a nod to their legacy. It does not matter how short their stay in the music world was or the importance to the history of music, they were a part of the early ‘70’s rock that would become the classic rock that you now hear on top rock radio stations to this day. I read a review that considered their labors as inconsequential, I do not agree. If in fact what they recorded did not matter, this album would not have become a collector’s item nor would music fans have the opportunity to hear it again today. Indeed this is not a great memorable album that ranks amongst the all-time classics; it is however, a solid and enjoyable listen.(Keith "Muzikman" Hannaleck)

Thanks very much, Silverado!

I did just find this album. You are right - it's a shame this band wasn't given time to mature. I think their subsequent works would have really demonstrated teh talent that is only hinted at here. Still worth the buy though!

Band was great. Ed Cass is a cousin and played with group on Long Island back in the 70's. I miss the great sound and fine friend. I am very happy I keep the original record all these years.
Dan Bennett Ke2cj@aol.com