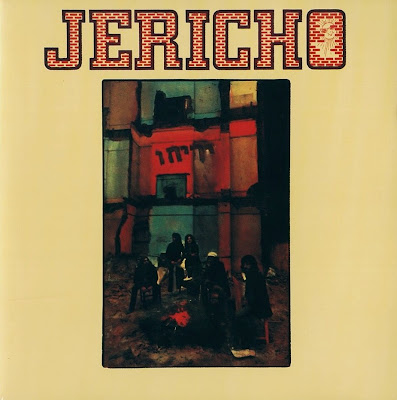 This band was originally from Israel and they were known as the "Churchills". They moved to England in 1968 and released an album under the name of the "Churchills". They later re-named the band to "Jericho Jones" and released an excellent album in 1971 named "Junkies, Monkies and Donkies". For some reason they changed their name again, this time only dropping the "Jones" and going as "Jericho". This album was released in 1972 and received some FM airplay. It was very well received by the critics.
"Ethiopa" - This song got some airplay from self-respecting radio stations that were allowed to play their own setlists. This is a fast tempo, hard rocker right out of the early RUSH soundbook. The first two and a half minutes are a hardrocking instrumental that sets the tempo and melody. There is some great bass playing and guitar soloing. Rob Huxley's throaty vocals then scream in. The tempo is fast and heavy with plenty of guitar fills (a mixture of King Crimson and Led Zeppelin). A fantastic hard rock song. Rating - *****
"Don't You Let Me Down" - Acoustic guitar opens this tune, but doesn't stay long. Electric guitar, drums and vocals soon take over. Heavy bass lines and drum beat with vocals that sound like Badfinger on steroids. The tune has a strong, surging rhythm with fantastic bass work and guitar playing. A very hard rocking song. Rating - ****
"Featherbed" - The sound is reminiscent of early Alice Cooper, "Killer" era. There is some nice vocal harmonizing with a strong '60's vibe going on. The song has a few tempo changes ranging from hard and fast with blazing guitar solos, to slow and mesmerizing like Iron Butterfly's "In-A-Gadda-Da-Vida". Extended guitar solo with psychedelic echoing and distortion. The guitars are given ample room to shine. The song then returns to its main theme and ends with Who-esque drum crashing and power chording. Another fine piece. Rating - ****
"Justin And Nova" - Synthesizer effects of a spaceship landing opens this song. Acoustic guitar and piano with some group humming, followed by drums and bass. A very psychedelic, spacey feeling envelopes this song. Orchestral strings in the background helps the mood reach the stars. There again is great bass playing and nice guitar fills throughout. The lyrics are space flight oriented (chemical or mechanical determined by the listener)! The piano and strings get alot of attention. The tempo changes throughout but the ethereal feeling remains. High pitched "AHHHHS" along with Keith Moon-like drumming and repeating guitar melody lands you back to Earth. A beautiful piece. Rating - ****
"Kill Me With Your Love" - The sound of water accompanied by acoustic guitar, clears the way for the electric guitar with echo effects. Flute playing then joins adding color and ambiance. Thunder-like effects gives one the feeling of listenig to a storm while laying in bed. The tempo and mood then makes a 180 degree turn, as the drum and bass kick in. The tempo turns fast; the drums are hard, bass heavy and guitar chugging. "Move it up and down. That's what she told me. Spin it round and round. That's what she told me." Hey! She told me the same thing! Oh, well. The lyrics are funny but the musicianship is excellent. This a very heavy, hard rocking song that KILLS! Great work. Rating - ****
This was the last album the band did, as the group split up shortly after this release and returned to Israel. Even though the band no longer exists, thankfully this music still does. This is a lost gem from the progressive/hardock era that highlights the awesome musicianship from that bygone time. The playing is topnotch and the album is as well. (By doggiedogma "doggiedogma") 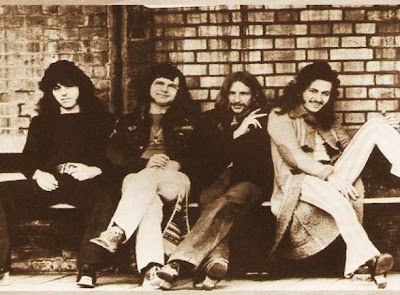