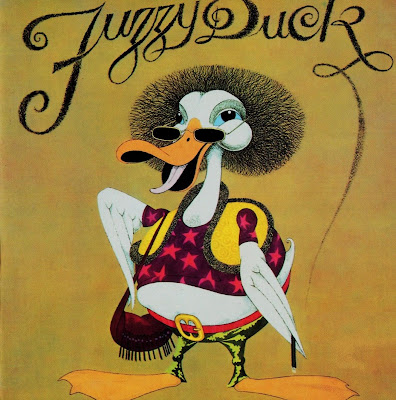 This is one of the many harder-edged and organ dominated progressive bands that emerged in the early Seventies. Unfortunately very little is known about FUZZY DUCK's history. The musicians were Paul Francis (drums, percussion), Mick (Doc) Hawksworth (bass, vocals, acoustic 12-string, electric cello), Roy (Daze) Sharland (organ, electric piano) and Grahame White (guitar, vocals, acoustic guitar). The eponymous album from 1971 was released on CD by both the German Repertoire Records and the UK Aftermath Records. It has obvious hints from mainly Atomic Rooter but also Vanilla Fudge.(ProgArchives)

Though the brief career of Fuzzy Duck may only have consisted of one album and two singles the musical history of its various members reads like a "Who's who of rock and roll".
Formed in 1970 and based in North London the original line up consisted of guitarist/vocalist Grahame White, ex-Andromeda, bassist Mick Hawksworth, organist Roy Sharland and ex-Tucky Buzzard drummer Paul Francis. Managed by Gordon Mills, who also managed Tom Jones and Gilbert O'Sullivan, Fuzzy Duck signed to MAM Records, a subsidiary of Decca, and recorded their self-titled debut LP (MAM LP 1005). However just before the album was released White left (later turning up in Capability Brown, Krazy Kat and Jackie Lynton Band) and was replaced by Garth Watt Roy. His first recordings with the band came via the "Double Time Woman"/"Just Look Around You" single (MAM 37) released in August 1971. A second single "Big Brass Band"/"One More Hour"(MAM 51) was released in November 1971 but by the end of the year they decided to go their separate ways.
Garth Watt Roy teamed up with his bassist brother Norman to form the Greatest Show On Earth who released two albums, "Horizons" and "The Going's Easy", for EMI's progressive Harvest label. Since then he's recorded with the likes of East Of Eden, Limey, Marmalade, Steamhammer, Bonnie Tyler, Barbara Dickson, The Barron Knights and was also a founder member of The Q Tips. Mick Hawksworth went on to work with Matthew Fisher before teaming up with Alvin Lee for The Ten Years After LPs "Rocket Fuel" and "Ride On". Drummer Paul Francis went on to work with Tranquillity, Maggie Bell, Mick Ronson, and Chris Spedding and has recently been touring with Steve Harley.(Mark Brennan)

They were in the history,the bands, who had out of luck.
Recorded their very good or excellent album - only that the board passed unnoticed, or gained the popularity of small, not proportional to the level of the music. How much were these: Andromeda, Arcadium, T2, The Norman Haines Band ...

The members of Fuzzy Duck were certainly not novices by the time they banded together and released their only studio album. Bassist Mick Hawksworth had spent the latter sixties with future Atomic Rooster alumnus John Du Cann in the hard-core psych band The Five Day Week Straw People, with both of them later moving on to the semi-legendary psych band Andromeda where they were joined by Fuzzy vocalist/guitarist the late Grahame White. Drummer Paul Francis had played with both The End and Tucky Buzzard. And Roy Sharland had been a member of the pre-Uriah Heep lineup known as Spice. So from that curriculum vitae you would expect a sound that included psych and blues guitar, heavy Hammond organ riffs, and above all very well-structured rhythms. Plus this was recorded in 1970 so throw in poor production, muddy bass notes and unremarkable male vocals straining outside their natural limits.

Well I’m happy to report that the band does not disappoint, as the previous paragraph describes Fuzzy Duck to a ‘T’. Presumably named after the old drinking game of the same name, Fuzzy Duck were a brief flash in the pan that apparently served as little more than a vehicle for the various professionals in it to move on to other things. The band doesn’t seem to have stayed together for more than a year or two, but they clearly had enough in the form of individual reputation and connections to land a record deal on the fledgling but up-and-coming MAM Records label.

But keep in mind that blues-based psych rock with heavy bass, lots of Hammond and strained male vocals were standard fare in 1970, so I’m not sure this really qualifies as progressive music unless we’re assuming just about everything from Canned Heat to Blind Faith qualifies as prog rock. Probably not.

The album kicks off with a heavy bass, lively Hammond rocker titled “Time Will Be Your Doctor”. This is pure hard rock but well played (“Country Boy” later on the album falls into this category as well). And while “Mrs. Prout” is quite similar there is a move toward more psych-leaning guitar and drawn-out keyboards ala Ray Manzarek. After this comes “Just Look around You”, which borders on being a heavy folk tune but is backed with the heavy organ and bass emphasis again.

"Fuzzy Duck" is a reliable portion rousing hard rock playing in the classic style. In general, there is a fairly simple scheme: melodic and catchy, which is the basis for the impressive guitar solos and the Hammond organ on the background of all the great driving rhythm section. About this piosenkową page seems to care more Mick Hawksworth: both "More Than I Am," as well as (to a greater extent) "Just Look Around You" more prominence was nice melodies (although instrumental parts are great), and the compositions of other men treat this piosenkową part of a more secondary importance in relation to the instrumental madness (exception is a very melodic "Country Boy"). This does not mean that they neglect compositional side, "Mrs.. Prout "(one of the two best parts of the album) has a lot of impressive changes in mood (strong, guitar, riffowy the beginning, and then breaking a very nice climate, booming song, passing in the madness of the dominant Hammond organ). Both of these approaches to compose a great fuse in the magnum opus of the album, "In Our Time" (by Mick Hawksworth), where instrumental madness perfectly lined connect to the soul, rushing rousing song (due to the soul, all associated with the actions of the Grand Funk Railroad).
The CD reissue (unfortunately not remastered though) includes a handful of singles recorded after White left the band and was briefly replaced by Garth Watt-Roy (Living Daylights, Greatest Show on Earth, East of Eden). The production on these is a bit better, and a couple (“Double Time Woman” and “One More Hour”) were released as singles, presumably with the other two bonus tracks occupying their backsides. These are much lighter on organ, virtually devoid of bass and include horns. The sound is decidedly more AOR than the original album, and I suppose these were only included because the CD version had a lot more whitespace than the original forty minute vinyl version had.

For fans of old rock - the position is absolutely mandatory!!!

thank you so much