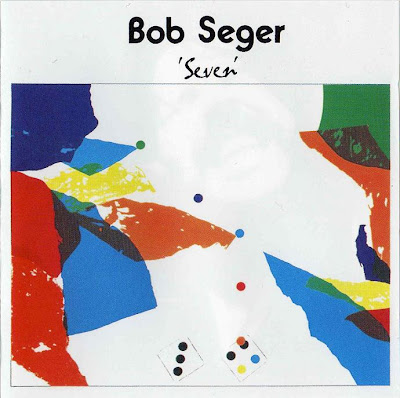 On 'Seven', released in 1974, Bob Seger introduces his Silver Bullet Band (consisting of Drew Abbott on lead guitar, Chris Campbell on bass, Rick Manasa on keyboards, and Charlie Martin on drums), which would soon carry him to fame and fortune with his subsequent albums 'Beautiful Loser' and 'Live Bullet'. 'Seven' is, obviously, Seger's seventh album, but the dice on the cover, which add up to seven, suggest Seger was also hoping for a bit of luck as he rolled out this release. 'Seven' was following Bob's best album (IMHO), 'Back In '72', which only aspired to number 188 on Billboard's album charts, and the artist simply had to be wondering just how good he would have to be in order to achieve steady, national recognition. 'Seven', unfortunately, would not crack the Top 200. No surprise then that Bob began penning songs such as 'Beautiful Loser'.
But 'Seven' is far from being a loser. Unlike many musicians, who put out a lot of dubious work before gaining widespread acclaim, Seger had been putting out quality albums and singles since the mid-1960's. He was signed by a major label and toured extensively, so his inability to bask in the limelight is a mystery. Ironically, several of the songs on 'Seven' mark the transition in Seger's musical style that would finally turn popular attention his way.
'Seven' is a short disc, tallying just 30:24 over nine tracks. There were three singles released from the disc, the adrenalin-laced rockers 'Get Out of Denver' and 'Need Ya', and the bit more restrained, upwardly mobile 'U.M.C. (Upper Middle Class)'. Each song received significant airplay but failed to crack the Top 40. Nevertheless, each of these songs found a place in Seger's setlists in his more fertile years.
The first five tracks represented the opening side of the original vinyl version of 'Seven', and it was rock and roll heaven. Every song is infused with high levels of energy and emotion, especially 'Get Out Of Denver' ("...'cause you look just like a commie and you just might be a member...") and 'Need Ya'. Seger seems to be offering a history lesson on William Jennings Bryan with 'Cross Of Gold' ("you can crucify the world on a cross of gold") and a lesson on long-distance lust on 'School Teacher'.
Side two on the original vinyl opened with the mid-tempo rocker 'U.M.C.', featuring a nice wah-pedal guitar from Abbott, which unfortunately was becoming passe in the mid-1970's. 'Seen a Lot of Floors' is a barroom stomper, and probably the weakest track offered. On '20 Years From Now', a piano ballad, Seger heralds in the sound that would evolve into solid hits such as 'Like a Rock'. The closer, 'All Your Love', is a country rock number with a catchy melody and chorus suitable for Texas line-dancing. The last two songs make it apparent that Seger is branching out into unexplored territory, genres beyond the traditional garage-rock fare that had fueled so many of his previous discs.
As Seger moved beyond 'Seven' he left me behind. I may be a bit unusual in that I find much of Bob's earliest work to be his best. Tracks like 'Ramblin' Gamblin' Man', '2 + 2 = ?', 'Heavy Music', 'Ivory', and 'Rosalie' represent the Seger sound I love. Unfortunately, Bob has divorced himself from his early releases, so great albums such as 'Back In '72' and 'Seven' will cost you an arm and a leg to purchase in the CD format. I used a cassette to make this review, but Seger could give those fans who loved his music when others ignored it a real gift by re-issuing the CD versions. Doesn't sound like a bad way to make a buck, does it Bob? By Running Man (Chesterfield Twp., MI)

Not unusual at all, it's the people who like his later stuff that are the weirdos.