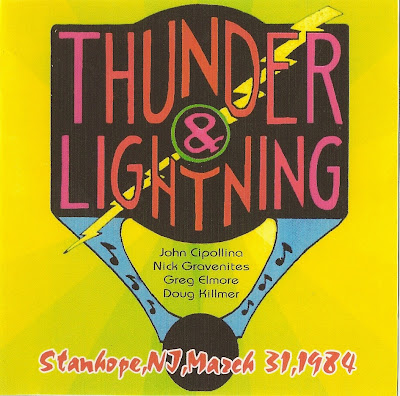 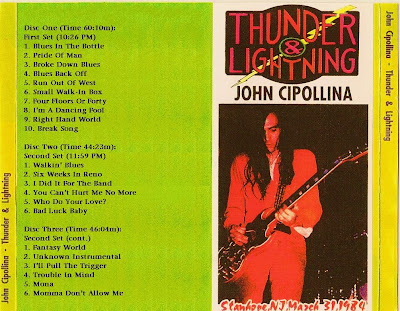 The "Stanhope House" was a fabulous roadhouse in Northwest New Jersey, near Lake
Hopatcong. They booked an eclectic bunch of rock, blues, country, and folk acts. The
area was beautiful, very rural, and the atmosphere in the club was very relaxed. I saw
quite a few acts there, covering many of those genres. Sound and sightlines were
good, especially if you got there early, and snagged a good table. I heard that it closed
not too long ago, which is a real shame. There were usually two sets, which often made
for a very late evening.
This was my first time to see John Cipollina, and my favorite of the three bands I saw him
perform with. The added bonus was Nick Gravenites, who I also thought was super. I met
John prior to the show, and had him autograph a few things for me. He was incredibly
nice, and must have talked to me for half an hour about his career. He would often do
some calligraphy on whatever he signed, as well as his autograph. A great, and very
underappreciated player. The last time I was at the Rock N' Roll Hall Of Fame in Cleveland,
they had his Gibson SG with his wild amplification system, with all the horns, on display.(Comment & original post by bpthree....Many Thanks)

Thank you very much for this great concert Silverado.

Thanks for the john Cipollina. You've made my day, no my week no my year.

The Stanhope House is still alive and well and presenting shows. A wide diversity of acts from indie to blues. L'il Ed & the Blues Imperials, James Cotton, Kenny Neal and the New Riders are all on the list of upcoming shows.

I just started to learn to blog, please visit my 'rock' blog at
Rock 1 on 1
any input will be very appreciated..thanks..