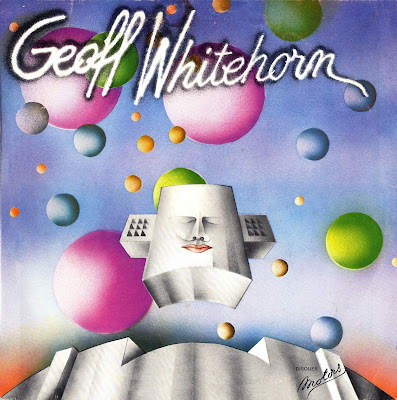 The album was called 'Whitehorn', and was not only released in Germany, France and Japan, but also in the Netherlands (1974). The label was Pink Elephant (PE 877070) and it was distributed by Dureco. 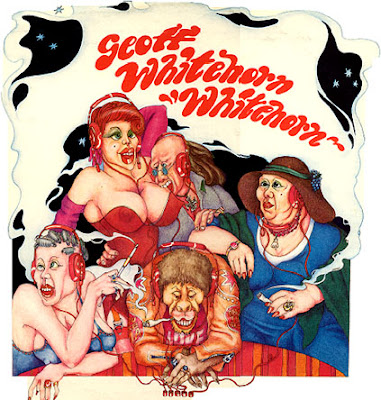 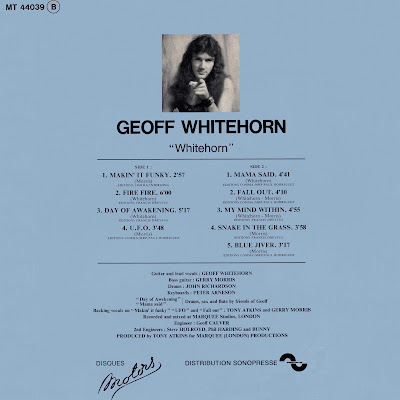 Day Of Awakening, Mamma Said - drums by Cliff Davies and sax, flute by Dick Morrissey: both are mentioned on the sleeve as 'friends of Geoff': they were under contract with Gull Records (1974) to record the If album Not Just Another Bunch Of Pretty Faces (which includes Geoff). Geoff made this album just before joining If.
Makin' It Funky, UFO, Fall Out - backing vocals by producer Tony Atkins and Gerry Morris. Recorded and mixed at Marquee Studios, London.The sleeve is a story in itself: quite shocking for the seventies as it's a drawn picture of an old man with a German war cross around his neck putting his teeth into the bare boobs of a huge well-shaped lady. In front of those, two smoking ladies plus a smoking ape (!), but all five have head phones on ... on the back, a picture of Geoff in a smoke cloud (was this album sponsored by some cigarette company?).
Compared to his albums of the nineties, 'Whitehorn' is less interesting for Procol fans as his vocals are more to the fore than his - this time funky - guitar-playing, though on Fire Fire Geoff really shines. Day of Awakening could be an If outtake, Mamma Said has some nice interplay between Geoff's guitar and Morrissey's sax and My Mind Within is a slow ballad where Geoff stretches out the notes like only he can.

Love for you to check out my posts for nutrition & musicians on the road! My work falls under Fuelin’ Roadie & you can find me on twitter, as well! Practical tips for the roadie! Working Musician.