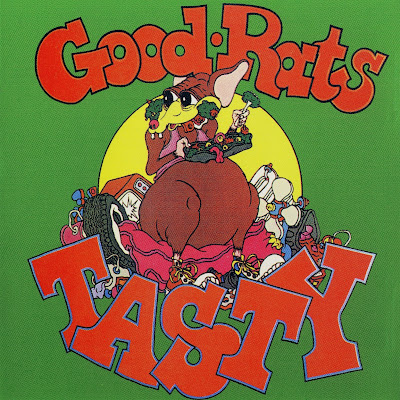 "Tasty" is by far the greatest accomplishment by "America's Favorite Unknown Band": The Good Rats. I was first aquainted with the "Tasty" album at a young age when my father, who was a Good Rats fan in his youth, passed his taste in music down to me. I first became familiar with the popular title track, "Tasty", the upbeat lead-off track, "Back To My Music", and the eeire but lyrically ingenius and funny "300 Boys". Later on, I came to recognize the musical brilliance in "Klash Ka Bob", "Poppa Papa", "Phil Fliesh", the vocal magnificance in "Songwriter", "Injun Joe", and "Fireball Express", and the nostalgic ingenius in "Fred Upstairs and Ginger Snappers". And then it hit me. There is not a single song on this album that isn't worth listening to. Peppi Marchello posseses the rock and roll voice that most bands dream of having, John Gatto's guitar playing is flawless (check out "Klash Ka Bob" to hear Gatto at his best!), Lenny Kotke's fingers fly on the bass, Micky Marchello's guitar and vocal harmonies are always dead on, and Joe Franco's drumming is admirable. Essentially, The Good Rats are the model band for 70's rock. Why then did not make it big is beyond mystery to me. The "Tasty" album is a must-have for rock fans of all ages.(By The 5th Beatle)