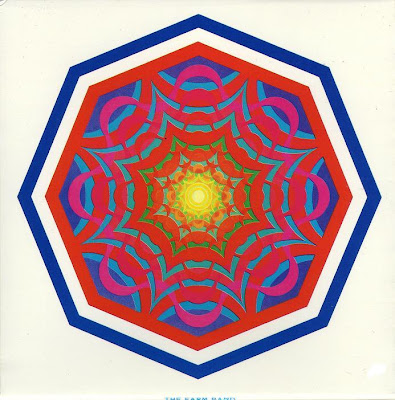 Kind of a given here, don't you think? The Farm Band (also operating as Stephen & The Farm Band and the Tennessee Farm Band) was the houseband at The Farm, flagship of all hippie communes. I strongly recommend anyone with an interest in the rural revolution to check out this amazing place more; the book "Voices From The Farm" (Rupert Fike, ed.) is a good start.
This massive 2LP set was the Farm Band's first release and also by some miles their finest moment (later LPs are pretty good too, though, and I wouldn't want to let go of any of them). A nine-piece outfit, the standard rock setting is augmented by flute, electric fiddle, and French horn(!); mixed vocals and long, jam-oriented material give this an undeniable late-stage West Coast feel (not much of a surprise, really, as most of the Farm residents originated from San Francisco). The mood is one of joy and spontaneity, where you easily can imagine a few hundred longhaired freaks out in the fields groovin' all night long into the morning sun, as the last jam slowly fades away.
This spontaneity also results in performances that are perhaps a tad "loose", shall we say, or even sloppy, with vocal harmonies going all over the place. Songwriting never was the Farm Band's forte either. What they do succeed in is creating a sort of tribal Earth Rock, where the leadguitar of Walter Rabideau cuts through time and space leading the band further and further away into holy man jam land; the rhythmguitarist steps on his wah-wah, the violinist comes sweeping in from the cornfield ready to push things into even higher grounds, and eventually it's a wall of sound-effect that soars high above the watertower, leaving Summertown, TN, as nothing but a tiny dot on the map that stretches out far below. Get the picture? When the jams here really gel it's an amazing power at work, a psychedelic testimony with a groove that appears to be endless.
This being a very communal effort it feels contradictory to single out any specific player, but I can't let the opportunity pass to praise Walter Rabideau's guitarplaying. One of rock's unsung guitarheroes, his solos have a rich tone, an amazing flow & if you like me have an inclination towards air guitar-moves, Walter's all you need for a night of good fun. Ok, the last statement may not really be serving his reputation much good, but he really is fantastic, and an Acid Rock Legend in this household. On this album he also benefits from having some hot rhythm guitar to play against, by someone named Joseph (last name unknown to me), who wasn't on any of the subsequent LPs.
In all, this is a document of a time where possibilities seemed endless (the heading on the Farm Band's touring bus read "Out To Save The World"), the music being only a fracture of what it was all about. The Farm is still there though, with some 300 members, but the Farm Band called it quits in the late 70s or so. Like any other Farm product the packaging here is awesome; a thick gatefold cover, huge poster and printed inners. A piece of art, a statement and an essential piece of underground head sounds.(http://www.beautifullies.se) 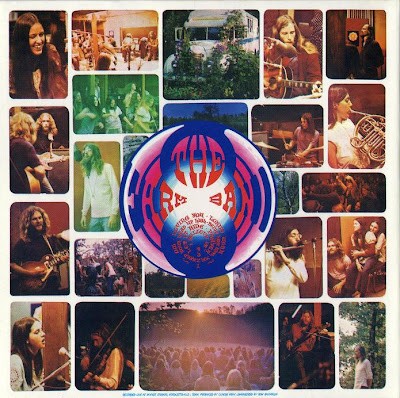 Joseph on guitar is Joseph Rhodes.

any chance to re-up this link ?

Very interested in this recording, would love a re-up!