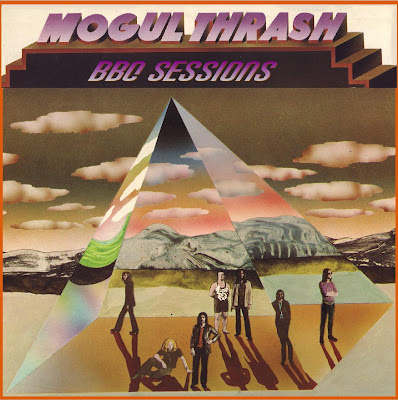 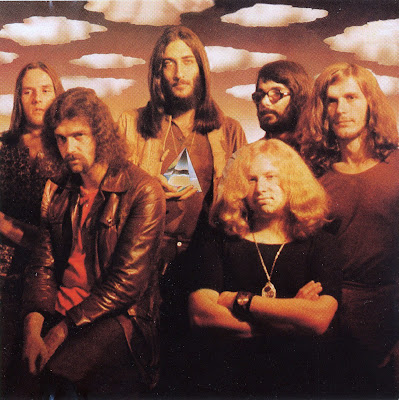 British jazz-rock band Mogul Thrash evolved from James Litherland's Brotherhood, which in addition to guitarist Litherland (an alumnus ofColosseum who formed the group in 1969) also featured guitarist/reedist Michael Rosen (previously of Eclection), drummer Bill Harrison and the so-called "Dundee Horns" -- saxophonists Roger Ball and Malcolm Duncan. With the addition of ex-Splinter singer/bassist John Wetton, the group rechristened itself Mogul Thrash, debuting in 1970 with the single "Sleeping in the Kitchen"; their self-titled RCA album appeared the following year, going largely unnoticed at home but finding favor throughout much of Europe. However, faced with legal problems with their management, Mogul Thrash was forced to disband shortly after the record's release; while Wetton went on to join Family and later King Crimson, Duncan and Ball soon reunited in Average White Band.

Mogul Thrash released just one album, the eponymous Mogul Thrash (1971). It was produced by Brian Auger, who also played piano on one of the tracks. Brian Auger's Oblivion Express featured Robbie McIntosh on drums, who would later become a founder-member of the Average White Band. When McIntosh died of a drug overdose in 1974, he would be substituted by another Oblivion Express drummer, Steve Ferrone.

I love this band. I never understood why James Litherland never amounted to more.

by the way, Thrash not Trash; trash thay weren't!

Thanks a lot,for BBC Session
especially when they are as good quality

Previously existed as The Dundee Horns and acted in Scotland.
August 23, 1970 was the last concert of the Brotherhood of Knighton Festival. The name of Mogul Thrash force since September 1970, when the team mingled with Brian Auger. and in the recorded summer of 1970 only one album for Mogul Thrash (RCA SF 8156) production of Brian Auger,but released in January 1971. Progressive rock with, very jazzy atmosphere. Style comparable to the Colosseum, Keef Hartley Band, If. More heavy from Blood Sweat & Tears and Chicago. Brian Auger was playing the piano (track album - nr.5)song "ST. Peter". It is interesting that the sound engineer Eddie Offord was known then of record groups Yes and ELP. Pete Brown wrote lyrics. Neither the single, nor the album were not on the lists. A lot of concerts in England and Europe, where they were even more popular. In Belgium, SP Sleeping in the Kitchen was a hit. After the collapse of Duncan joined the Ball and The Average White Band, and Wetton went to Family, beginning a fantastic adventure in the British scene of many bands (Mogul Thrash album was his first). Mogul Thrash were not popular in England, attracted more attention in Europe.
The band lasted until June 1971
The disintegration of the band was a consequence of legal disputes between them and the manager, due to poor album sales.
The new, remastered...made in Sweeden.
Laibel - CD FLAMED GAMES (2011)
(apparently much better sounding album and extended by 35 minutes) Additionally contains two mono recordings from singles and 5 unpublished, studio tracks (including 2 unreleased planned for the second LP) from the BBC archives...

where can I find a link for the download?

To me one of finest brass-rock band from that era.Many thanks...

Great. Having just downloaded the 2011 edition of their sole studio album from PHROCK, I was checking their discography on rateyourmusic and noticed this bootleg. A short google search led me to this page, unbelievable :) I didn't even need to search torrents and Russian blogs, etc.! Thanks very much for sharing...