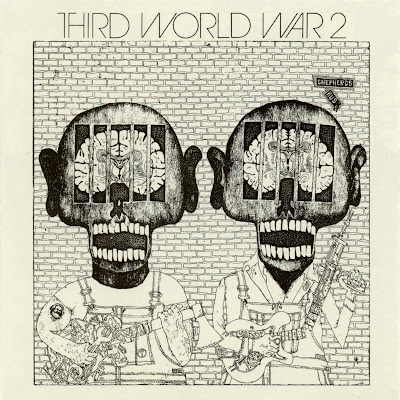 Much like their American counterparts Mc5, Third World War were a heavily politicized band from England who made their mark playing heavy rock songs with an overtly left-wing political agenda. They were well known amongst the London Underground scene, playing free concerts with the likes of Arthur Brown, the Pink Fairies, and the wonderfully eccentric Viv Stanshall (before he formed the infamous Bonzo Dog Band).
Their songs focus on the poor, disenfranchised, the uneducated; on rebels, Hells Angels, and semi-skilled laborers fighting for their freedom. The music could at moments be sensitive, but was more often than not a raw, "punk" sound.
This lp, their 2nd (and last), dates from 1972, and musically is a more complete album than their self-titled debut. There are some excellent bluesy numbers, mainly "Coshing Old Lady," (their tribute to Hells Angels), mellow ones such as "Factory Canteen Mews," which offers excellent guitar work by Terry Stamp. Mainly, the lp is heavy rock numbers, such as "Yoko," "Urban Rock," "Rat Crawl," and their classic numbers- "I'd Rather Cut Cane for Castro," and the brilliant "Hammersmith Guerrilla," with very political lyrics such as:

"Get yer arse down to Hammersmith town; Join the urban guerrillas Take up arms against the crown; Don't talk about wrong and right, Get out and fight!"
Pretty heady stuff.
Their 2 lps are wonderful listening, and fans of the "Kick Out the Jams" era Mc5 will find Third World War (the name says it all) as kindred spirits- and even more political!
An exceptional cd well worth getting!(By Sean M. Kelly) 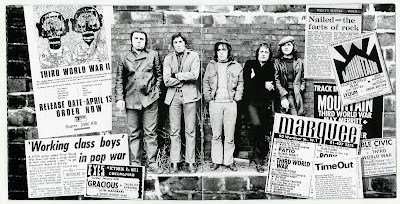 This is Very very nice article. Everyone should read. Thanks for sharing and I found it very helpful. Don't miss WORLD'S BEST

the saucer people a dit…

Many thanks for sharing the Third World War album - I thought I was pretty up on the radical mileu here in the UK in the late sixties and early seventies with individuals, groups and artists like Mick Farren, Pink Fairies, Christopher Grey, King Mob and the Angry Brigade et al - but I only came across these Proto punks last year with the Glam compilation All The Young Droogs which had their single Working Class Hero on it.

According to the sleeve notes it says that Joe Strummer spoke to one of the band members of WWIII and told him their band was the only one that mattered before punk (which I presume included his own squatrockers the 101ers).

This band definitely deserves wider exposure both in terms of its proto punk sound and image and its radical message at the time.

I really enjoyed reading this post, I always appreciate topics like this being discussed to us. Information very nice. I will follow post Thanks for sharing.
Skribbl.io Mods
BLACK MESA REVIEW
Mope.io Polar Bear Guide
The Benefits of Playing Pocket Tanks

“I could not have closed on my first home without Mr, Benjamin Lee ! Benjamin and his team went above and beyond for me on this transaction. He handled my very tight turn around time with ease and was always available for me when I had questions (and I had plenty), even when he was away from the office, which I greatly appreciated! He and his team handled many last-minute scrambles with the seller and worked tirelessly to make sure that I could close before my lease (and my down payment assistance, for that matter) expired. Mr Benjamin is incredibly knowledgeable Loan Officer, courteous, and patient. I went through a couple offers on properties before my final purchase and Benjamin was there to help with each one, often coordinating with my agent behind the scenes. I felt supported throughout the entire process. Thanks to Benjamin and the tireless efforts of his team, I am now a proud home owner! I would encourage you to consider Benjamin Briel Lee for any kind of loan.Mr, Benjamin Lee Contact informaions.via WhatsApp +1-989-394-3740  Email- lfdsloans@outlook.com.