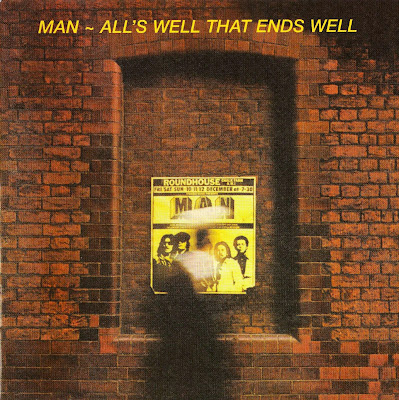 This would have been the final Man album were it not for the fact that, after a few years off, they got back together again. In 1976, the band decided to split and they decided to round things off with a few nights at the Round House in London which was pretty much their home venue despite their Welsh origins.
Those who had the good fortune to see the shows commented that the band were going out at the top. The rest of us are fortunate that, according to their contract, the band owed the record company one more album so we got this show.

Perhaps the enmity within the band drove them to this performance or perhaps the break up put them into some sort of last day of term mood. I think that you can hear a little of both of these in Deke Leonard's vocals. Especially on "Hard Way to Live."

The twin guitars of Leonard and Jones are of course a feature of the band's music but on this album you can hear that they can do the same thing with their voices as well.

The album is a mix of short snappy songs and the longer tracks that provide a platform for the band's extended guitar jams. I think that the mix between the two is just right on this album. We get some great short snappy tracks such as "Romain" and "Hard Way to Live" to go with the longer material. Of the latter, I really like the version of "Spunk Rock" here. Perhaps not the best but certainly a good performance.

This album would make a good introduction to the band. It displays a range of their musical styles and you certainly get to hear their vocals at their best too.(By John Peter O'connor's) 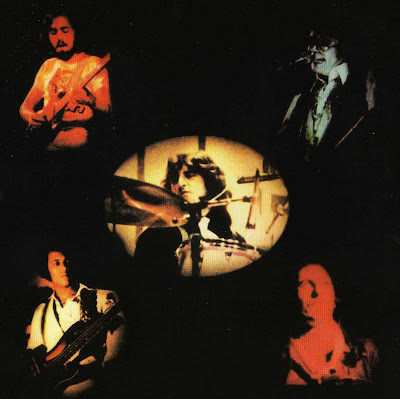 This was the album which was meant to mark the end of the Man band; in fact, all it did was mark the end of the Man band for the seventies. A live album recorded at the Roundhouse in North London, it included an insert which featured a sepia tinged photo montage of band members past and contemporary, and a mini family tree. Produced at the same time was a TV documentary which is dealt with elsewhere, but worth a look for the inclusion of part of the montage. During interviews in the video, band members don't shy away from the conflicts, and all the aggression is at least channeled into the music contained on this album.

Things kick off with a sparky version of the classic 'Let the Good Times Roll', and with the following 'The Welsh Connection', it's clear what internal contradictions there must have been - it's more of an adult oriented, melodic, almost progressive type of song, driven mainly by Phil Ryan's wash of keyboards, and Terry's quasi-jazz drumming. Absolutely nothing wrong with it (except perhaps for an unnecessary synth solo), but it hinted that the band were taking turns at featuring their favoured styles of the time, which clashed as much as harmonized.

'The Ride and the View' was still closer to its original atmospheric version than the brutal rocker featured in the nineties, but is perfectly delivered. 'Hard Way to Live', one of Iceberg's staples, is vigourous, short and sweet, just as it should be, though the keyboards do sound slightly superfluous to my ears.

The final three tracks were on the second side of the original vinyl. 'Born With a Future' is the third of the tracks culled from the 'Welsh Connection' album, and probably shows Man at their best from this era. A real mixture of rock, soulful vocals from Micky, typically incisive guitar from Deke, sympathetic keyboards, and a furious rhythm section - Terry precise as ever, and John McKenzie playing some awesome bass. After that, 'Spunk Rock' and 'Romain' sound oddly out of place in this context; good, but not great.

Not the best Man live album by any means, it was partly produced as a momento for history, partly as a contractual requirement for MCA. Scarcely an essential purchase, but interesting even so in helping to shed some light on why the band split up in the first place.

Can you re-up this one please. I have it on vinyl but have no record player
R.I.P. Deke Leonard

Cheers for this one!

Thanks for the re-up, cheers