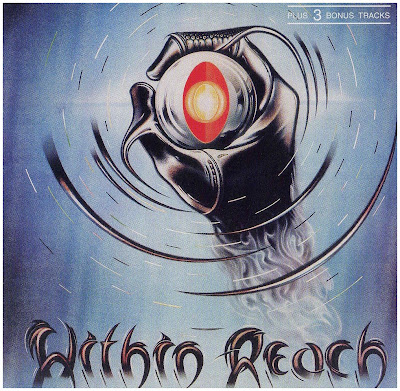 I saw this band three times on the UK college circuit (at UCW Aberystwyth in the mid-70s) and they sounded almost exactly as they do on this album: wonderfully melodic very tight musicianship led by Pix on lead guitar; West Coast US inspired, but nevertheless 'English sounding'. Pix is still playing with a band called Racket: he is better than Mark Knopfler, but having just as distinctive a signature sound. Pix was from the Channel Islands. A picture of him shows him playing a strat and still looking in good health. There is a telephone number given on which you can book gigs, by Racket, that is, but sadly not by The O Band.
The band used to be obsessed about getting the sound-engineering just right on stage and would keep us waiting for 10 to 15 minutes, playing to an empty, locked auditorium while the engineer made fine adjustments on the desk. You could watch through the windows in the doors. The wait was always worth it. The band were fine vocalists as well as great players. When I saw them they were first called Oasis! I do not know why they changed name. I remember Pix played with a slightly distracted look of concentration and absorption by the music. He used to look above the heads of the audience, apparantly studying the wall behind us, but seeing nothing I guess. He took his picking really seriously.
So to the album. Each track has a complimentary momentum and feel so that the overall effect is very coherent. The last track is a kind of gentle 'goodbye'. Smile is a Diamond seems to be the most highly regarded track, but I find them all equally good.
If you want a benchmark, I would place Crosby Stills Nash and Young 'Deja Vu' and The Band 'Stagefright' slightly ahead of this album. In other words Within Reach by The O Band is World Class Country Rock and an essential album for any blissed-out soft rocker. I love it.
Dear Pix: any chance of an O Band reunion gig? You'd find me in the front row and before that, trying to get in just to enjoy the sound check. Dig your style! How did you develop it and what set up did you use back then? Stay in good health: too many rockers die young!!
(By Dr. S. L. Smith "Steve Smith"

I have raved enough in my comments on the first three releases by this band, so I'll just say same goes for this one and thanks again Silverado for the nice re-posts!