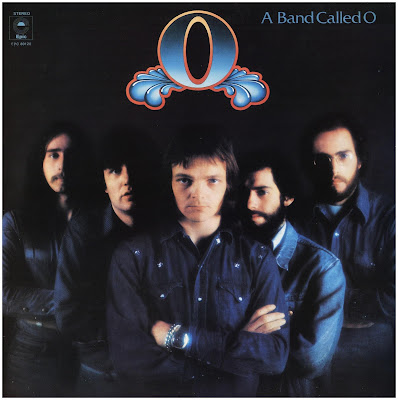 A Band Called O were a band from Jersey, Channel Islands. Originally known as "The Parlour Band", playing progressive rock, they renamed to "A Band Called O" for two albums on CBS/Epic and later to "The O Band" for a further albums with UA. Despite issuing five albums, on three major labels, and being championed by John Peel, for whom they recorded four Peel Sessions, they had no chart success; but were a popular live act, who toured Britain and Europe.

Formed in Jersey, Channel Islands, circa 1970, as "The Parlour Band", the early line up comprised brothers Mark Anders (bass and vocals) and Craig Anders (lead guitar and vocals) with Peter Filleul (keyboards and vocals) formerly of the Climax Blues Band , John “Pix” Pickford (guitar and vocals) and Jerry Robbins (drums). Released in 1972, The Parlour Band's only album Is a Friend?, was produced by Nick Tauber in a melodic progressive rock style, sounding like a "more mainstream, less art-rock-inclined Yes" with strong keyboard and guitar parts.The Parlour Band toured supporting Caravan and Steve Hillage’s Khan.

A Band Called O
They relocated from Jersey to Leicester, changed their name to "A Band Called O", and their drummer to Derek Ballard. This line-up released their first album on the Epic label, produced by Ben Sidran of the Steve Miller Band, and Chris White of the Zombies. A Band Called O (1974) and, despite being an album orientated band, a single "Rock and Roll Clown"/"Red Light Mama Red Hot" was released in Germany while they recorded the first of four Peel Sessions on 24 September 1974. They recorded their second Peel Session on 18 March 1975, before touring with Man and John Cipollina. Later that year, they released their second album, Oasis. They had one track "There Ain't Nothing I Wouldn't Do" on a single to promote their tour with Sassafras and Randy Pie as the "Hot On The Tracks" package.
Filleul left and was replaced by Ian Lynne, after about 6 months he was also replaced by Jeff Bannister, formerly with the John Barry Seven, The Alan Bown Set and Jess Roden’s Bronco.[8] The band changed label from CBS/Epic to United Artists, played their third Peel Session on 23 March 1976 and released their third album Within Reach later that year.[9] A promotional single "Excerpts from Within Reach" was issued in the UK whilst two singles were taken from the album: "A Smile Is Diamond" / "Coasting" was issued in Germany, and "Don't cha Wanna" /"Coasting" in the UK. They played their fourth and final Peel Session on 22 February 1977.

The O Band
Musically, their style had already evolved from progressive rock to soft-rock, but it then moved towards a pop style. They changed their name to "The O Band" and released a 12" EP Look to the Left, Look to the Right in 1977. before recording their final album The Knife, from which the single "Almost Saturday Night"/"Love Ain't A Keeper" was taken, also in 1977. Shortly before a planned change of management, Pix Pickford decided to leave for a solo career. The O Band later disbanded at the end of 1977.

Silverado, thanks a million for this post - these guys are really good and unfairly overlooked when reading chronicles of this time period in rock music. The blend of straight ahead mellow 70s style and progressive put them firmly in the art-rock catagory for me, and certainly somewhat progressive but never really groundbreaking. Just a good enjoyable listen from first song to last - and that can be said for all their releases including The Parlour Band. I hope a lot of people check this out!!

Thanks for putting this up - I used to go and see this band play live around London regularly in the early seventies - they put on a great show, which they never really captured on record. Got their LPs somewhere around but no turntable, so I haven't heard them for many years.

I really like The Parlour Band and I thought they disbanded until I found out they re-named themselves and released several more LP's! I have all but this, so thank you for posting!