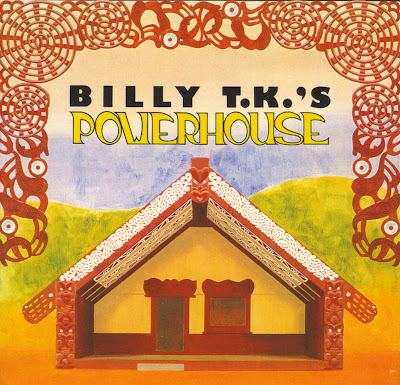 From the vinyl collection of my friend Cipcal , many thanks to him ...
Billy Te Kahika (Billy T K) left Human Instinct after their 1972 tour of Australia and shortly after began recruiting for his own unit to play more fluid, rhythmic music. He convinced former Blackfeather drummer Steve Webb to come out from Australia and along second guitarist John Bilderbeck from Wanganui and Gav Collinge on bass created Powerhouse.
Initially the band worked in Wellington where at Ali Baba’s and Lucifer’s nightclubs then with only Collinge remaining from the original line-up a new unit was pulled together back in Palmerston North where Billy and promoter Murray Taylor started their own nightclub called the Boulevarde.
The new Powerhouse featured Billy on guitar, Gav on bass, Ara Mete on rhythm guitar, Jamie Tait-Jamieson on keyboards, Bud Hooper (later Neal Storey [Dragon] and Peter Kellington) on drums, Arnold Tihema on congas and lead vocals and Mahia Blackmore on vocals and percussion. Powerhouse remained in that residency about 18 months playing their own brand of contemporary South Pacific rhythms with strong Santana influences. 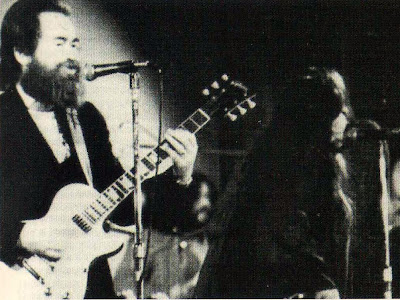 Thank you Silverado and Cipcal !

Good stuff. my wife was flating (ie living in the same house) with Billy TK at that time - Christchurch NZ 1975.

They were all into Prem Rawat, ie Maharaji and at that time known as Divine Light Mission (hence the 3d track I guess?).

I have a number of Kiwi prog albums from that era - Space Farm, Living Force, Underdogs...

Do you want them?

Thank a lot Peter...I'm interest by Living Force in lossless, if you can post links here...I will publish on my blog...Thanks in advance...

I have Living Force in 192kbs only. it's been ripped from vinyl as it was never re-released to CD.

I've hunted (on the web) for lossless but nothing so far. My own vinyl copy along with my entire vinyl album collection is long gone.

The only album from the city of Palmerston North (Palmerston North). The group leader TiKey Maori guitarist Billy (Billy TK, Bill Te Kahika) earned him the nickname "Maori Jimi Hendrix." He was the first indigenous Maori has become a rock star world-class, combining in his work a modern blues-rock with progressive Pacific ethnic rhythms. He has written many original songs, covers of which are often made by other musicians, but is best known for working with the band Human Instinct. The only album he released with his group Te Whare Mana (Powerhouse) in 1975, was issued a limited edition in the UK and Germany and is now a rare collector's ... Billy TiKey began experimenting with feedbacks and develop their own electronic pedals in 1966 with his band The Sinners, which included drummer Ted Cash, bassist Sonny Ratana, rhythm guitarist and vocalist Harold Hine Theo Swanson. As soon as the music of Jimi Hendrix reached the Pacific, he began eagerly to listen to these sounds, quickly picking up the moves of every successful thing. After four years of joint action by The Sinners were reduced to a trio when Theo Swanson and Harold Hine left the band. Soon, Billy went to Australia in Melbourne, where the gathering of Compulsion c Paddy Beach and Reno Tehei. Returning to New Zealand in May 1968, he accepted an invitation from the eccentric singer-drummer Maurice Greer (he played the drums standing up, citing the fact that he was so comfortable to sing), who returned after two years of playing in England with the giants of British rock scene, join his band Human Instinct. The trio, which were replaced by bass player Frank Hay, Peter Barton, Larry Waide and Neil Edwards, quickly became one of the most high-profile, highly paid and respected rock bands in the country. With a group of Billie recorded three albums, "Burning Up Years", "Stoned Guitar" and "Pins In It". In 1972, after a brief tour of Australia, he left the band due to differences in musical direction. B 1972 guitarist forms new band, Billy TK's Powerhouse, gathered in Wellington to an Australian drummer Steve Webb (ex-Blackfeather), guitarist John Bilderbeck (ex-Wanganui and Gav Collinge on bass. When Webb and Bilderbeck gone, Powerhouse returned to Palmerston North, recruited Ara Mete on rhythm guitar, Jamie Tait-Jamieson on keyboards, drummer Bud Hooper, as well as percussionists, singers Arnold Tihema and Mahia Blackmore. At one time, the group also included Neal Storey (ex-Dragon) and Peter Kellington. group recorded only one double album Life Beyond The Material Sky in 1975. poluinstrumentalny Stylistically it is jazz-rock, reminiscent of Mahavishnu Orchestra, with the strong influence of Pacific music. most successful was their performance at the festival Ngaruawahia, where they are preceded by a set Black Sabbath. In April 1996, Billy was TiKey invited to participate in Oakland concert of their idol Carlos Santana. He expected that he will only support a rhythm and was surprised when Santana gave him all of his solo version of Bob Marley's Exodus. In subsequent years, Billy has worked with various groups, in particular, recorded a album with King Loser and performers of hip-hop DLT. Another project was the soundtrack recording of the Indian mysticism, which was filmed on the Ganges. In 2002 he took part in the reunion project, Human Instinct, and worked with Tony Littlejohn, founder Blerta . To this day, Billy TiKey Tekahika remains an icon of Kiwi culture and one of the most respected guitarists in Oceania ...

Many thanks for this rarity!!!

oldfuzzface:I like Billy better when he played with the human instinct.this isn't too bad..too bad he couldn't give it a little more oomph!.I thank you for sharing,Silverado

Hey Silverado, Is it possible to reup this one ? ThX a lot !